Annihilation was a hell of a book. It’s one I enjoyed, am glad I stumbled across, even gladder I read, and am still a bit unsure about who exactly I can recommend it to. 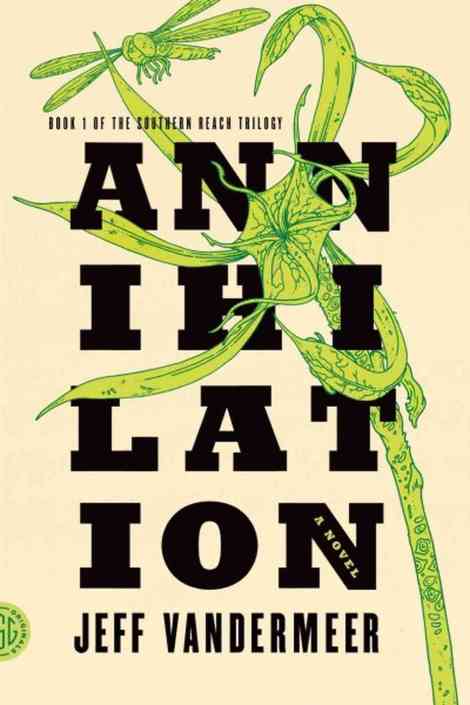 The cover of my edition of Annihilation by Jeff VanderMeer

Annihilation is the kind of book that is necessarily polarizing, not just because of the way that it tells its story, but because of what its story is, where it goes, and how it ends. It’s the first novel I’ve read from Jeff VanderMeer, who I only know from his non-fiction creative writing guide, Wonderbook. I was a fan of Wonderbook really just because it was a hodgepodge of ideas around writing and structure and whatever else, but packaged in a sort of creative compost of half-nonsensical images and themes, though it ultimately left me with little idea about the sort of fiction that Jeff had actually written. Frankly, reading about his work on things like Veniss Underground that he sometimes referenced, I didn’t feel much compulsion to read him.

That changed when I started listening to old episodes of the Books in the Freezer podcast recently. Given the horrors that have surrounded us on a daily basis in 2020, not to mention the increasing authoritarian overreach of the Trump administration, to say nothing of the last few decades of bitter American political strife, I’ve felt a very urgent need to return to horror. I will probably write about this in the next while, so I’ll leave only a brief explanatory comment here saying that when the world seems to have gone haywire, sometimes the only thing that helps me to feel normal again is to read something even worse. Authoritarian regimes are bad; global pandemics are bad; wildfires consuming huge swaths of the places I live and have lived are bad; but none of them really hold a candle to the pure existential dread of, say, a cosmic force that’s lived for unknown aeons awaking to demand the souls of all human beings to fuel some dreaded machine of the apocalypse. That comparison is for me a form of comfort, odd as it may sound.

Either way, I’d gone on a bit of a horror binge. I watched The Void at the recommendation of several friends, which I may also write about at some point soon. I started listening to the Black Tapes Podcast as well, which I’ve been really enjoying (I have long loved radio dramas, though I mostly listen to them in Japanese), started playing Control, and began working on a number of new writing projects, including one for my Ko-fi page, which I started a little while ago (more news coming soonish). I read Laird Barron’s deliciously weird horror-thriller The Croning, which I’ll need to write about soon, and got together a collection of horror films to watch with Ashley on Halloween. Then I heard about Annihilation on Books in the Freezer, acquired a copy, and set myself to the task of reading it.

To begin with, I find it difficult to call Annihilation a horror novel, mostly because nothing about it is especially horrific. Yet at the same time, it is impossible to consider it anything but “weird fiction” in the cosmic horror sense. (Which isn’t to say that the novel does or doesn’t go into anything actively cosmic—I have no desire to spoil anything in either direction—only that it very much fits the themes.) This is, through and through, a tale of cosmic horror, just one that’s told without resorting to anything particularly horrifying. There are a few unsettling moments to be sure, plenty of tension, and themes and plot beats centered on death and metamorphosis, but the book reads like what it posits to be: a surreal, dreamlike account of a biologist’s field work. That’s an overly simplistic description, of course, one that dispenses with details of plot and character development that are certainly present, but this isn’t a novel heavy on plot. It tells a reasonably simple story, and the real joy of reading it comes from all the details one gets to fill in as they go, even as more mysteries blossom at every turn.

In the end, what I took away most from Annihilation was its atmosphere and the comfortable, familiar correspondence I had with its main character. She and the other characters in the book remain nameless, something the book’s immediate sequel, Authority, has already dispensed with in its opening chapter (which is all I’ve read of it thus far), but she is likable, charmingly perplexing, and reveals her story with a disarming intimacy. VanderMeer has crafted a work here singular simply because I’ve never read quite such a lackadaisical, contemplative tale of cosmic horror before. It does leave me compelled to see the film based on it, even though word of mouth has not exactly been overwhelmingly positive, and the trailer looks to me like the opposite of everything that made the book special. The consensus seems to be that it’s weird and ambiguous, yet the trailer alone reveals things the book takes a long time to even hint at. Ambiguity, I suppose, is relative.

All told, Annihilation is a book for people with patience. It isn’t in a hurry, although it’s not a particularly long book, and it wants to paint a very particular picture in strokes you might not have chosen yourself had you been behind the pen. But they work, and masterfully in some sections. VanderMeer does a particularly exceptional job with trying to describe the indescribable, giving you emotive, sense-adjacent descriptions that give impressions without trying too hard to be concrete, and it works wonderfully in the few moments it needs to do some heavy lifting. If you’re impatient, or need a lot of discrete plot elements, Annihilation will prove difficult for you. It might also not be an easy read if you need your existential horror to be essentially horrific, or if you’re in need of a high volume of dialogue.

Annihilation eschews some of the expected, everyday elements of horror fiction, crafting instead a steadily paced narrative of adventure, existential considerations, and a strong lead character, the last of which is used as a contrast to and lens through which to view the interesting things and situations she encounters. On its own, it would have felt like a somewhat artsy novel of cosmic horror. As part of a trilogy, it feels like a tantalizing opening volley, a fertile soil from which a deeper and more … specific narrative may emerge. I will just have to wait and see what Authority brings next.

December 2013 - "Dog Training" and "As Simple as Teacups" featured in the Fall 2013 issue of Sheepshead Review (print only - $5, shipping included, here).

February 7th, 2011 - Featured in deviantART.com's The A,B,C's of Literature: Q by the-photographicpoet.

January 10th, 2011 - a poem from a well bottom featured on deviantART.com.

Notes from the Deep