Hi everyone! It’s been a good 18 months since my last post. Shame on me! I always have the best of intentions, like anyone that maintains a personal blog-ish thing, but those intentions so often turn out to be what paves the road to a big, audience-less field of crickets.

So why the silence? Well, it would be cliche to say “I’ve been busy” and leave it at that, but you guys … I’ve been real busy.

To begin with, I’m now in my third semester at California State University, Chico. After a single semester at a local college to ease the pains of transferring from out of state, I’m officially a Wildcat. I adore the campus, which is an absolutely beautiful place, and have met a host of awesome colleagues in my adventures thus far. I’m double-majoring in Asian Studies and Religious Studies while minoring in Japanese, am tutoring all 4 sections of our Japanese program, and am set to study abroad in Japan for the 2018-2019 academic year at Shinshu University.

But that’s rather skipping ahead a bit. Summer is approaching, and while I didn’t get into the summer program I was hoping to (yes, I was also trying to get to Japan for a two-month intensive prior to going for a year, because I am a glutton for punishment), that’s probably for the best, as I could use a summer off. Last summer I didn’t really get one, as I spent just over a month of it in China living in a Buddhist monastery—and of course a lot of the surrounding time preparing for it and recovering from it.

Jin’e Temple in Ningbo, where I lived for the better part of a month.

China, you say? Buddhist monastery, you say? Why, yes! And if you have even the slightest inclination of trying such a crazy thing for yourself, I heartily recommend that you check out the Woodenfish HBMLP. A finer group of people I have never met. The staff were genuinely amazing people, the thought of whom fills me with pride and hope for humankind, and the students I found myself thrown into the whole thing together with are people I will never forget for the rest of my life.

It would be difficult to say anything reasonably succinct about my time there, as it’s the sort of thing that could probably better be detailed in a good 5 or 6 blog posts. Indeed, I filled a decent portion of a paper journal while I was there, and had there been more reliable access to the Internet, I’d have considered posting something online. As it was, I did manage Internet access via a proxy, though I didn’t use it for much of anything but some emails home. But from the first step I took into the airport in Shanghai, where I was run through security and was sold a wonky local SIM card for my phone that never quite worked right, to the final days with my friends after the program had ended, I was living what is probably the (thus far) best experience of my life. 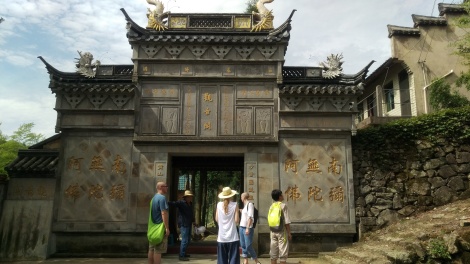 A small temple and waystation in the mountains, the name of which I do not know.

We explored Shanghai, Hangzhou, and Suzhou before and after the program, though our monastery was in Ningbo, a couple of hours south of Shanghai not far from the eastern coast. The monastery itself was big enough, but there was only a handful of monks in residence. The laypeople we met were absolutely lovely and treated us with tremendous kindness (sometimes even in spite of our overabundance of youthful western attitude). The food was wonderful vegetarian temple fare, which my mentor Dr. Clower at CSUC had told me was “functionally near vegan”—thankfully he was right, and 90% of the food was entirely free of animal products—and the atmosphere in the country was without the pollutants one expects of a major Chinese city.

A view from the top of the mountain behind the temple, where we hiked on one of our “days off.”

I shaved my head, meditated a whole lot, washed my laundry by hand, and was lectured to by three really fantastic Ph.Ds who came to teach us, in addition to getting lessons in Taiji, calligraphy, and Chinese Zen painting, all from people who graciously volunteered their time to us.

It was humbling, to say the least.

I had my heart broken in several significant ways, fell in love with the people I met and lived with, and experienced a more severe culture shock on my return than I could have expected. As it turns out, living in community with people day in and day out can have a profound effect on a person, and can make living alone in a large house with nobody but a dog rather lonely and opulent-feeling.

Perhaps I’ll write more about the experience at some point, if somebody bothers me enough to get me to do it, but otherwise I will at some point finish getting all the photos online somewhere (Google Photos has not been cooperating as far as the uploading process goes, for some reason) and will make an update.

So what’s next? Japan! And for a whole lot longer!

I don’t know for absolutely certain whether or not I’ll be going. I’ve been nominated for direct exchange to Shinshu by CSUC, but will have to wait to hear from Shinshu whether they’ve accepted me—but I’m assured this is a mere formality and there’s very little chance they’ll say no, barring some sort of unusual circumstance. The bigger issue is money, and I’m currently in the middle of applying for every scholarship opportunity I can find to apply for. It’s entirely possible that I won’t find enough funding to make the trip a reality, but I suppose equally possible that I’ll scrape together enough to make it happen. I guess time will tell.

Either way, it’s terrifying. My Japanese is still pretty sub-par, especially when it comes to speaking and listening in live-fire situations; but that’s exactly why I need to be there. I will, of course, be sure to set up a blog of some kind to document the trip, hopefully both in English and Japanese, and I’ll be attempting to visit a number of Buddhist and Shinto sites while there to take pictures to send back to my fellow Religions Club members and everyone in the Comparative Religions department.

With that, I’ll sign off, because this has gotten unbearably long and I’ve got three more scholarship applications that come due in two days.

2 responses to “A Wee Break in China, On to Japan”

December 2013 - "Dog Training" and "As Simple as Teacups" featured in the Fall 2013 issue of Sheepshead Review (print only - $5, shipping included, here).

February 7th, 2011 - Featured in deviantART.com's The A,B,C's of Literature: Q by the-photographicpoet.

January 10th, 2011 - a poem from a well bottom featured on deviantART.com.

Notes from the Deep